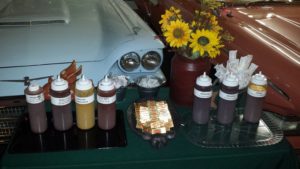 There are three major regions in the south that have their own style of BBQ sauce. They are North Carolina, Memphis Tennessee and Texas. At Bubba’s Country Cue, all three styles are served.

Carolina Sauce: A thin vinegar-based sauce that is usually not too spicy and not too sweet. This sauce is made mostly with just vinegar, spices and sugar. Other ingredients are sometime added such as catsup for a touch of color more than flavor. This sauce is a Carolina staple for mopping and basting their pork throughout the cooking process. Then it’s used as a finishing sauce to top off the world famous Pulled Pork Sandwich. Watch out, Memphis!

Memphis Sauce: A thin to medium tomato based sauce. Not too spicy but with a good sweet taste to it. Sometimes can be made with Colas or else flavored with a Bourbon or Whisky like Jack Daniels (you’re darn tootin)! These sauces are good on everything. Memphis sauces are served two ways…..on the meat, or on the side as a dipping sauce.

Texas: A thin to medium tomato based sauce that is generally spicier than sweet. Sometimes Texas sauce is not sweetened at all… you know those Texans gotta be more daring than residents of any other state!

The Sauces Brough to Your Event

Carolina BBQ Sauce: A vinegar based sauce that has a nice balance of sweet and sour. Not too spicy, but Bubba will be glad to add the heat for you hot-heads out there.

Bubba’s Sweet Memphis Sauce: A tomato based sauce that is not too spicy with a nice sweetness to it. For those who like a bit more heat with the sweet, extra heat can be added.

Coca Cola and Root Beer BBQ Sauce: Both are considered to be a Memphis style sauce with their thin to medium tomato based consistency. Cola sauces have a nice sweet tang to them, making them a good choice for all chicken dishes.

Carolina Mustard BBQ Sauce: A favorite of the Carolinas and Georgia. If you have not had it before, you must give it a try. Works on Pulled Pork the best.